Why I Became Vegan

Ok this is probably not the traditional “how I turned vegan” story, but it is my story. I was one weird little puppet. It all began when I was very young…

I was an avid bug squishing maniac like many wee ones, until my mom saw me trampling ants like some mindless robot, a creepy gleeful smile on my face. “Yes I am your God and now you must all suffer my fiery gleeful wrath!” That smile seemed to say. 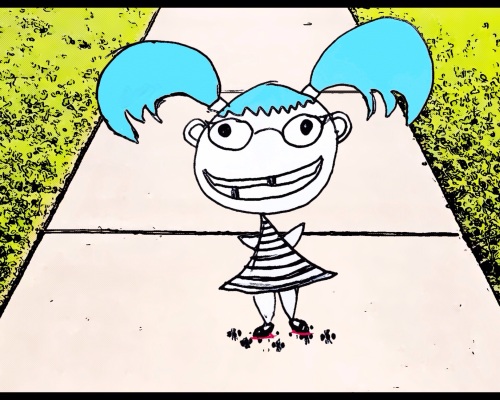 “Umm Olga you know those ants have little lives too” my mother informed me, looking a little worried for her crazed manic killing machine daughter.

I immediately stopped and thought about this. This was probably the most life changing moment of my life. “Whatttt? They have lives like meeee? But how? I thought… umm aren’t i… the ruler of all things??” It was a serious blow to my fragile belief that I was superior to all other forms of life.

After that I became totally and completely obsessed with the lives of other bugs. I would explore outside for hours lifting up stones watching all of the different bugs scurry around. I fearlessly collected all the information I could from picking up and inspecting every bug, reading books on them, and creating personal identities for the ones I saw most often.

Eventually, after much studying my poor deflated ego was able to return. I might not be the evil overlord of all things, where little lives are empty and meaningless compared to my own magnificence. But certainly I was still some type of all powerful creature… I must be the queen of all bugs!

I regularly kept watch over all the bugs under the stones in my yard, leaving bits of food near the ant hills and giving rolly pollies kisses to let them know they’d been graced by their benevolent ruler, but the true gift of benevolence and graceful leadership was shown to the massive number of silverfish living in the garage. 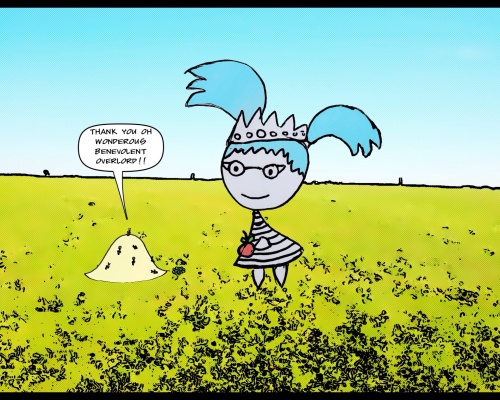 There were tons of old boxes and silverfish all over the place in the garage behind my house. Unlike the other bugs I kept watch over in my yard, I was certain that these bugs not only lived under my watchful eye, but they truly worshipped me and understood that I was their queen.

I would go sit for hours in the garage waiting for the silverfish to come and crawl on me. I named many of them and was quite sure I could recognize any of my more devoted followers on a personal level.

I’m not sure what my mom thought of her strange and creepy garage dwelling child who preferred to spend her time with bugs than anyone else. I’m not sure she knew what she created when she transformed me from that prideful manic killing machine into an obsessively benevolent overlord to the bugs. Certainly it must have been troubling to hear about other little girls wanting dolls and toys and new Barbie cars, only to see her strange daughter covered in bugs whispering secret messages to them in dark corners. 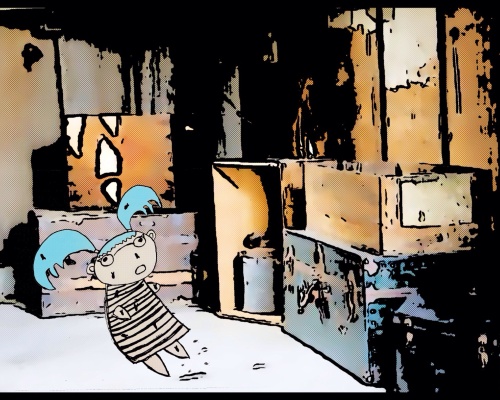 This gradually built up to little me realizing that despite obviously being superior to all other humans and creatures, (perhaps I had been adopted from some alien kingdom where I was meant to be an empress), mayyyybe other creatures also thought they were as important as I was, and mayyyybe their lives were just as important in secret ways that not everyone could see.

The final straw was me deciding that I wanted to have a bug collection, so I could see all the wonderful things I saw everyday right inside my room! My mom helped me setup a killing jar ( a glass mason jar with a cotton ball covered in alcohol). Maybe she was secretly relieved to see me back to my old psychotic killer roots, maybe she thought it would destroy my strange bug whispering garage dwelling ways and turn me into a normal Barbie doll loving girl in lace socks. Sadly for her, and happily for all of bug kind, it didn’t.

My first victim was a bright green moth ( Actias luna). I caught it and put it in the jar and watched it, getting ready to pin it in my exciting new collection. 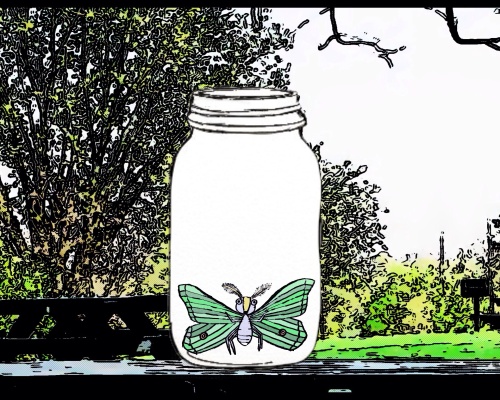 Happy at having found something so beautiful as my first specimen, and proud of my superhuman bug catching ability, I sat down to watch it die. I didn’t really understand what dying meant at this point. I didn’t understand that for it to become mine I would have to take the most precious thing that belonged to him/her.

To this day it’s one if my most vivid memories. Just watching this moth try to escape and gradually getting slower and slower. It stopped flying and settled at the base of the jar pawing at the glass with its legs, furry antennae slowly tapping the glass as it looked out.

I couldn’t believe what I was seeing. This moth… one of the citizens of my kingdom… was disappearing from the world. I envisioned the life I was taking from this moth, a life not really all that different from my own. What was I doing???? I tore the lid off the jar and released the moth immediately bursting into tears.

I’m not sure if the moth survived, but I like to hope it did. Shortly after this incident and one other I became vegetarian, not wanting to be responsible for taking the life away from other creatures, no more than I wanted my life to be stolen from me. 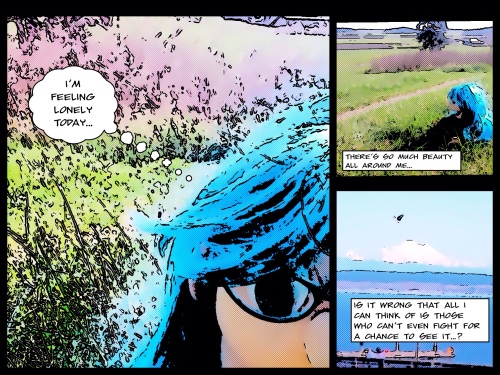 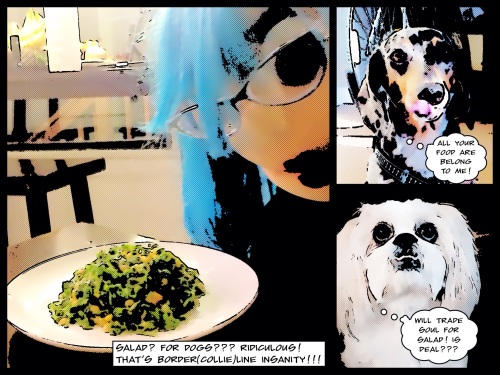 I Am A Fruit God!

Normally salad is the thing I eat when all other options have failed me.  “I must eat healthy!” I say to myself every morning.  And then by mid afternoon I’ve somehow convinced myself that surely stopping at my favorite Mexican restaurant and having a soy latte and bit if chocolate isn’t really so bad, I’ll just do some exercise that night!

But by night time I think to myself…. “Well, since I already messed up earlier in the day I might as well just have whatever I want for dinner this one last time and then seriously for real tomorrow I will be a HEALTH GOD! I won’t even want anything unhealthy at all!”

I go out to eat and get something like vegan Mac and cheese or fried rice, so proud of myself for the healthy godlike achievements I will make tomorrow.  “Great work future me, you are a super hero!” 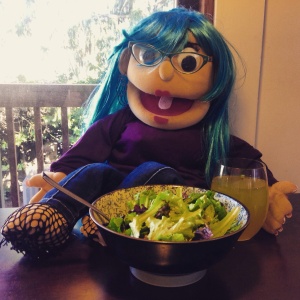 Umm.. you might have realized by now that this future reality only really exists in my tomorrow mind, it rarely ever comes true.  If you’re at all like me the this salad is a great way to try to combat your evil double that takes over your body and forces you to have Mexican food and chocolate for lunch.

It’s actually pretty tasty, and satisfies my sugar craving because of the sweet dressing and candied nuts.  Hope you enjoy!

1/4 cup of raw or candied walnuts

Optionally you can add vegan chicken or some quinoa to this recipe too!

Step 1: in a small bowl mix the maple syrup, lemon juice, apple cider vinegar, and siracha together.  Feel free to add more of any of the he ingredient to make it a desirable level of sweet and sour for you. 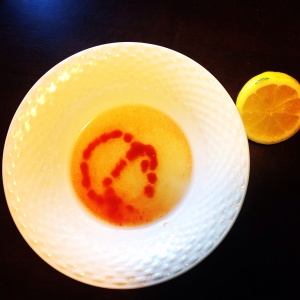 Step 2:  Get a big bowl and put some salad in it!  I’m not telling you how much to use, you have to make some of your own choices!  Then put the dressing on top of the salad and stir it up really well.

Step 3:  Add the walnuts, cranberries, and a little Himalayan sea salt to taste!  Vegan chicken and/or quinoa also tastes great in this salad so feel free to add some!

Muffins are awesome. Blueberry muffins are even more awesome. Therefore banana blueberry muffins must be like some type of alien crack. And I guess that a lot of people love having warm gooey breakfast muffins, but I don’t know… Maybe it’s a puppet thing, but I am a firm believer in the midnight snack muffin.

Here’s my current favorite banana blueberry muffin recipe, let me know what you think! You may want to hold the blueberries to just one cup, I just love having super fruity gooey muffins so I personally prefer 2 cups. Ingredients: 1 1/4 cup gluten free flour mix 1/2 cup almond meal 1/3 cup brown sugar 1/3 cup cane sugar or coconut sugar 1/4 cup coconut oil or earth balance 1 cup of almond or coconut milk 1 cup fresh or frozen blueberries (or 2 for super gooey ones!) 2 very ripe bananas 2 tablespoons agave or maple syrup 1 tablespoon apple cider vinegar 1 teaspoon baking soda 1 teaspoon baking powder 1 teaspoon salt 1 1/2 tablespoons vanilla extract 1 1/2 teaspoon cinnamon Cooking Instructions: Step 1: Preheat your oven to 350 degrees and line a muffin pan with paper muffin cups or grease the pan lightly with earth balance or coconut oil. Step 2: Mash the bananas in a medium sized mixing bowl. You leave some chunks if you like gooier muffins! Step 3: Add all of the wet ingredients in with the bananas (the agave, almond or coconut milk, vanilla extract, and apple cider vinegar). Step 4: Melt the coconut oil or earth balance in a small pan and then add to the wet mixture. Step 5: Mix all of the dry ingredients into a separate bowl (the sugars, gf flour, almond meal, salt, cinnamon, baking soda, and baking powder). Step 6: Add the wet mix to dry mix and stir until you have a nice paste. Step 7: Put the blueberries in a separate bowl and mix them with a spoonful of gluten free flour until they are evenly coated. Then add them to the other mixture. Step 8: Use a spoon to put the muffin paste in the muffin pan. Fill each muffin tin cup about 3/4 of the way full. Step 9: Bake your blueberry banana muffins for 22-28 minutes. If you use frozen blueberries they will probably be ready closer to 25-28 minutes. Step 10: What are you doing??? It’s way too hard to wait almost 30 minutes for muffins you crazy person! Quick, lick all of your cooking utensils and scrape your mixing bowl until there’s nothing left and anyone who wanders into the kitchen wonders how you managed to have such clean dishes without even washing them! Step 11: Ok if you’ve managed now to lick everything clean and still have time to spare, please don’t just stand around staring at the oven and leaving puddles of drool on the floor. People will think you’re very strange. No really, it’s weird. Stop please. Step 12: Eat the finished muffins! Eat them all right now! Wait!! Stop!! Let the cool first you idiot! Geeze you really are totally nuts! Enjoy!!